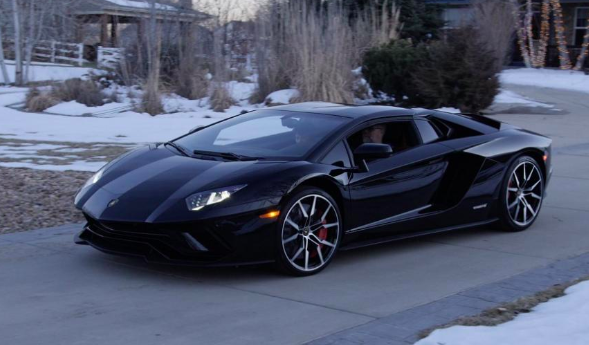 Only fairytale carriages turn into pumpkin after the clock strikes twelve and in real life everything happens exactly in the opposite way. We are going to tell you how a 3D printed supercar replica in the garage of an american craftsman and a loving father, turned into a very real Lamborghini Aventador.

This fairytale came to reality in Colorado, where a local man Sterling Backus had been working for couple of years on a replica of one of the coolest supercars in the Lamborghini series. The reason for it is his son Xander, a typical boy, who loves video games with sports car racing. A real sports car with the cost of $400 000 and higher is quite an expensive toy, even for a well paid laser physicist like Sterling Backus, but the boy was confident that his dad was able to build the car on his own.

Of course, the car cannot be a 100% accurate copy of the original but it can probably get to the level of a fully-featured sports car. The chassis  is almost ready, the car is already in running condition (see the video): the replica is built on chassis with a steel frame, a transmission from Porsche 911 and a V8 engine from a 2003 Chevrolet Corvette. Surely, it is not 750 horsepower like the original but even half of that power is no joke.

Meanwhile, Sterling is working on the body and fine-finishing. That is where 3D printing technologies step in to help, but not just that. The body parts are made using a hybrid technology: first, the base is made out of PLA-filament, then a durable carbon-fiber coating is applied. As an experiment, Sterling kept several prototypes of such parts under the scorching sun and was left satisfied with the results.

Sterling believes that for making stress-free parts it is sufficient to use non-reinforced printed and sheet plastics. For example, the bodies of the headlight reflectors and turning lights are printed with ABS and ASA, and the headlight lenses are made of transparent PETG. Sterling prints mainly on Chinese FDM 3D printers Creality CR-10S and CR-105S. In some cases, you have to use more durable materials, such as carbon-filled nylon. In such cases, another desktop additive system helps out – a two-extruder 3D printer with an enclosed print chamber Qidi Tech X-Pro.

Sterling has already spent more than 220 spools of filament, of which fifty went to waste, but there is not much to do about it – only learn from mistakes. Sterling buys some components over the Internet, and some of them are original parts made by Lamborghini, if they are not very expensive. So far, about twenty thousand dollars have been spent on the project.

Just before Christmas, the story took an unexpected turn when the representatives of Lamborghini contacted Sterling with an offer he couldn’t refuse. The company offered to pull a prank on his son by secretly replacing the 3D printed car with an actual Lamborghini Aventador at night. The offer was accepted.

Alas, the celebration will not last long: the Italians did not gift the craftsmen the supercar they were longing for. The car was only lent for a couple of weeks, but at least father and son will be able to drive it enough to study the original, and this is a considerable help in the realization of their own project. What’s even better – they won’t have to fear any lawsuits. As explained by the director of marketing and public relations Katia Bassi, the company is categorically against any rip-offs of the famous brand, but the management was so moved by this case that the company decided to make an exception to the rules and even play along.

Want to try out something similar and get your own 3D printed car? Or maybe you’re thinking of integrating 3D printing into your business model and cutting some costs? Check out large-format 3D printers, for example, Raise3D Pro2 Plus. This industrial-grade high-precision additive system will allow you to significantly boost your profits.